Just as Facebook CEO Mark Zuckerberg predicted, the world is becoming more social. There will be 1.43 billion social network users in 2012, a 19.2% increase over 2011, eMarketer predicts - amounting to a substantial share of the world’s entire population. 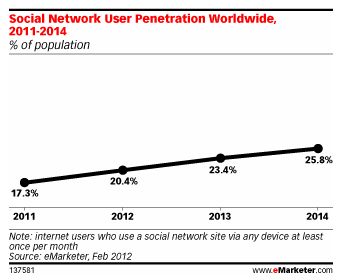 Facebook is a leading reason for the growth; it has rapidly expanded in markets such as Brazil, India and Indonesia, gaining new users and poaching from longstanding local favorites like Google’s orkut. In 2012, 837.3 million people worldwide will use Facebook, a 27.4% increase from 2011.

Three of the five top social networking markets in 2012 are also among Facebook’s largest markets - the US, India and Brazil. But the absence of China and Russia from the list means Facebook still hasn’t conquered the world. 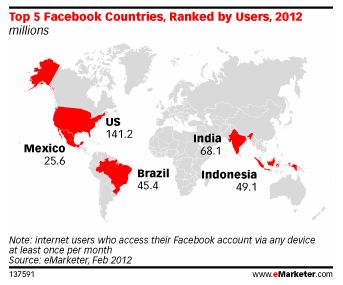 The US is still by far the leader in Facebook users with 141.2 million in 2012, although that base is growing the slowest among key countries. India will have the second largest Facebook population, with 68.1 million users this year, followed by Indonesia (49.1 million) and Brazil (45.4 million). Mexico will be the fifth largest, with 25.6 million users.

Where in the World Are the Hottest Social Networking Countries?
comScore Releases the "2012 Mobile Future in Focus" Report
Two-Thirds of UK Workers Think Social Networking Sites Should Be Banned from the Workplace
Greater China Internet Usage Led by Web Portals as Social Networking Remains Smaller Segment of the Market