US consumers are some of the biggest users of smartphone and tablet devices in the world, so why is their response to mobile ads so poor? According to Q3 2011 research from Nielsen, smartphone and tablet users in Germany, Italy and the UK responded more favorably to mobile ads than US device owners did. With smartphone ads, in particular, users in Germany, Italy and the UK were significantly more likely than users in the US to take actions - click on ads, conduct research or make purchases. 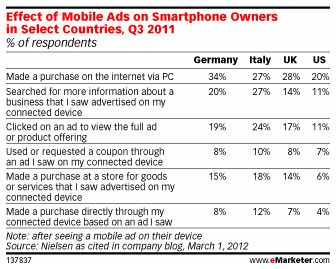 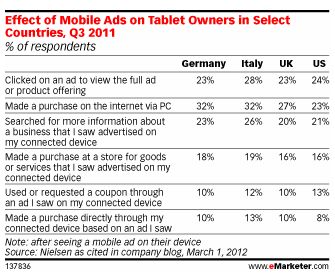 The novelty of the mobile ad landscape in Western European nations could be a reason for better ad performance than in the US. Smartphones, tablets and mobile ads are newer to Western European consumers, which could account for the increased time spent and actions performed in response to mobile ads.

According to Carsten Frien, CEO and co-founder of madvertise, a mobile ad network based in Berlin, smartphone and tablet usage is exploding in Western Europe. Frien told eMarketer in a February 2012 interview that for the first time, more smartphones were shipped than PCs or laptops.

“Mobile media consumption has also been exploding with the rise of the various app stores, but also with the growth of the mobile web,” Frien said. “In Western Europe, there has been a very steep increase in advertising dollars that are spent. ”

Mobile ad spending in Western Europe is expected to expand at a 52% compound annual rate between 2010 and 2015, according to eMarketer estimates. Germany will see the strongest gains in mobile ad spending among countries in the region, with a CAGR of nearly 69%. 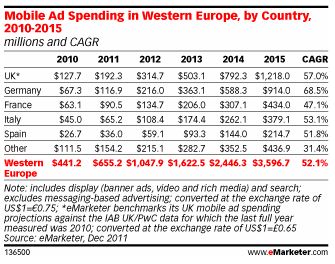 The growth trajectory for mobile advertising in the US is steep as well. However, US consumers have already expressed both cynicism and indifference toward mobile ads. For instance, in January 2012, 42% of US smartphone owners told market research firm InsightExpress they either very much or somewhat disliked mobile ads; and 32% were neutral in their attitude toward them. 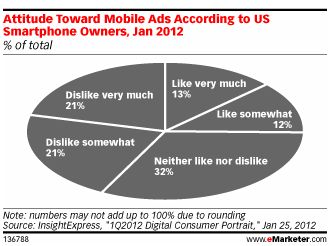 US mobile marketers should take note of the distinctions between US and Western European consumer behavior when it comes to mobile advertisements. Whereas US tablet owners were slightly more responsive to ads than their smartphone-owning counterparts, mobile device owners in Germany, Italy and the UK tended to be more engaged by mobile ads across devices.

Nearly Half of Feature Phone Subscribers Who Acquired a New Device in April Switched to a Smartphone
1 in 8 European Smartphone Owners Conducted a Retail Transaction on their Device
The Future of In-App Purchases
comScore Reports July 2011 U.S. Mobile Subscriber Market Share